Konica Minolta’s stand at Labelexpo became a magnet for showgoers in a continuing success story where 11 more sales were announced and quality leads more than doubled compared to the last European show in Brussels, Belgium, two years ago. The “incredible interest” shown in Konica Minolta’s AccurioPress technology is also being underpinned by customer feedback that will help shape developments to provide even better products and solutions in the future. 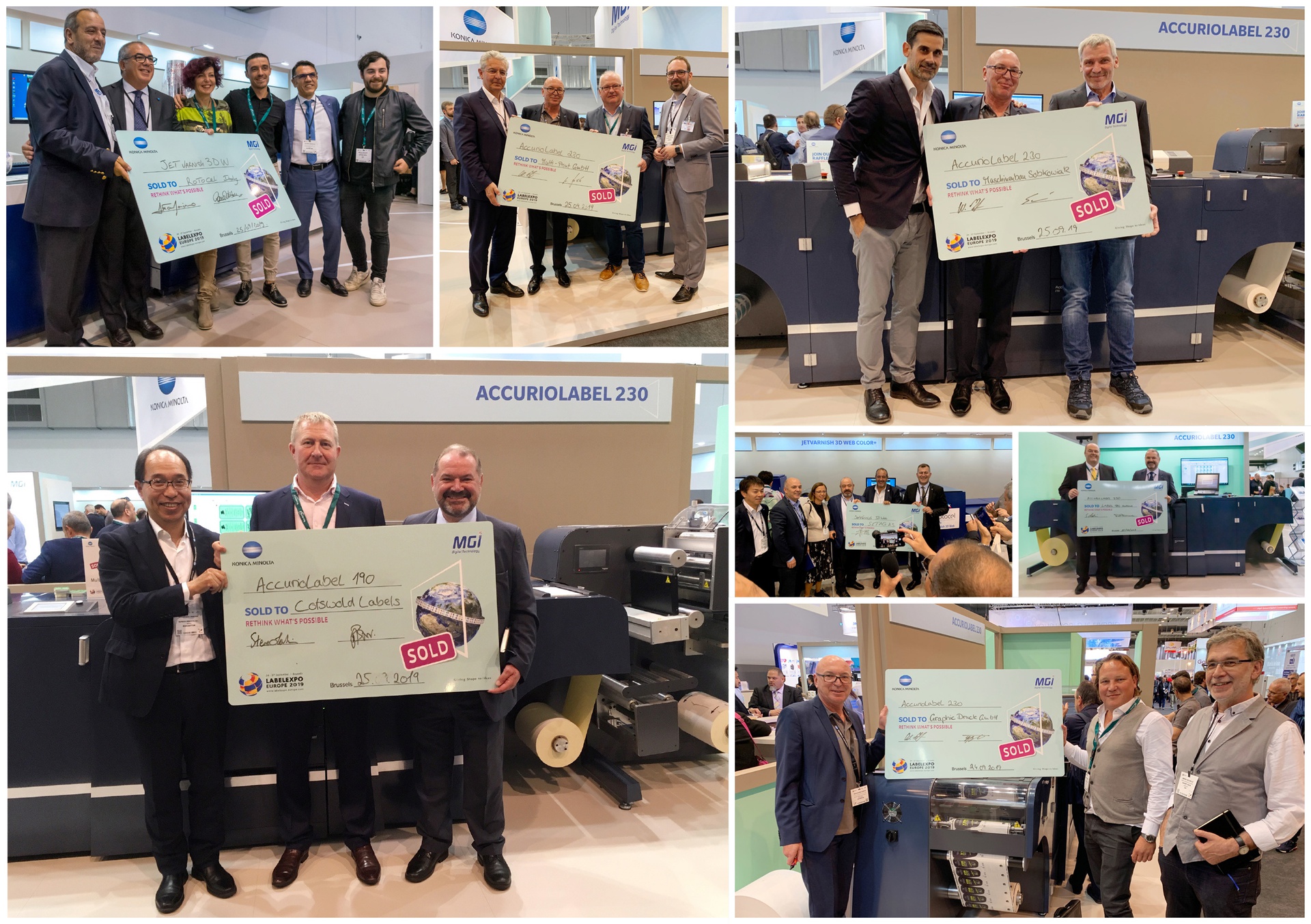 In a world first, Konica Minolta was showing two versions of its new AccurioLabel 230 (AL230) as a central feature on its stand. One of its AccurioLabel 230 was being shown with a flexo station for printing white inline for the first time. Supplied by Danish company Grafisk Maskinfabrik (GM), its development and manufacturing partner in Europe, this option will be coming soon. The AccurioLabel roll-to-roll toner press is ideal for short- and mid-production. It replaces the Accurio Label 190, whose global success has enabled Konica Minolta to become number two in marketshare in Europe (InfoSource Apr 18 – March 19).

A major attraction in Hall 8, the 380sq/m stand – twice the size of 2017 – attracted crowds every day. It was a joint stand with Konica Minolta’s strategic partner MGI Digital Technology, which had displays of embellishment and finishing workflow. There was a special focus on the MGI JETvarnish 3D Web Color+, a new roll-to-roll jet and embellishing press (flat and raised UV varnish and hot foil) for printing on labels developed in cooperation with Konica Minolta.

Another highlight was a digital label module from Industrial Inkjet Ltd (IIJ), the official sales and technical support centre for Konica Minolta industrial inkjet printheads outside of Asia. IIJ has developed its print engine concept further to include a range of standard press-adaptors for common flexo label presses.  Throughout the show, important advances were shown in software using augmented reality through Konica Minolta’s genARate application and others.

Providing world-class service and support that is provided locally, along with delivery of parts and consumables, Konica Minolta’s digital toner-based technology represents a success story in label printing that began after successful trials less than four years ago, with first deliveries made in early 2016. With an overall theme for Labelexpo Europe 2019 of “Around the world, around the clock”, this underlined how Konica Minolta AccurioLabel presses help hundreds of print providers around the world to move their business forward.

Eleven more sales successes were unveiled at Labelexpo by Konica Minolta, which announced a 450th landmark installation. First up was Graphic Druck, based near Koblenz, Germany, which signed for an AccurioLabel 230. Traditionally printing offset and inkjet, Graphic Druck was looking for a reliable system to meet growing customer needs for shorter-run jobs and quick turnaround times.

Another customer to take an AccurioLabel 230 was label printer and engineering company MultiPrint GmbH in a move it believes will add new business opportunities in a rapidly-changing label market. Employing 65 people across four sites in Germany, including from its headquarters in Hatten, Lower Saxony, MultiPrint already uses offset, flexo and digital inkjet technologies. The investment is an important step in filling niche markets and improving quality. One specific area will be for outside label production where toner technology is more stable and suitable than inkjet for water-resistant applications.

Rotocel, based in Bologna, Italy, announced an investment in an MGI JETvarnish 3D Web to enable a new integrated technology that allows the finishing of graphics to be customised without any system constraints.

Commercial offset printer Imprimerie Coste & Fils, based in Aubenas in the south of France, invested in an AccurioLabel 230 and a GM DC330MINI finishing system. Label printer Setag signed for an MGI Digital Technology JETvarnish 3D Web, the first company in Turkey to invest in the digital roll-to-roll embellishment finishing system that will work with existing digital and rotary machines. Best Box in Armenia also signed for an MGI JETvarnish 3D Web. Rounding off the show announcements were three machine deals for the UK, which included one each for Cotswold Labels and Label Tec, one AL230 for Etiquettes Pierre Foucher in France, and, last but not least, an AL230 for Maschinenbau Sobkowiak in Germany. This sums up to eight sales for Konica Minolta label presses and three for MGI JETvarnish 3D Web.